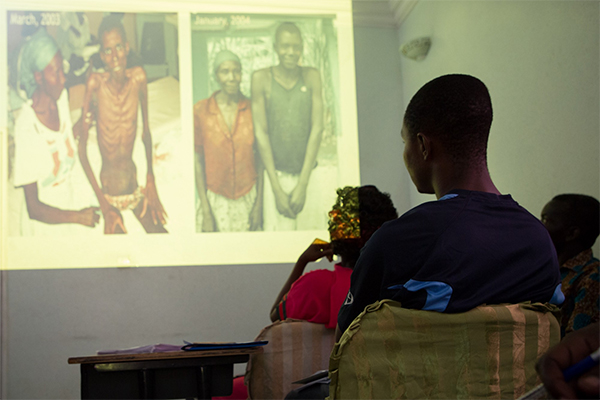 Posted at 10:12h in C4D, research, Video by Sibylle Desjardins

HIV/AIDS is still a taboo subject in many parts of the world. According to UNAIDS, 6.1 million people were living with HIV in West and Central Africa in 2017, and only 40 per cent had access to antiretroviral treatment.

In Mauritania, thanks to external funds and government support, HIV testing and care are free for all; however, these services are difficult to access in several regions outside of the capital.

The Centre de Traitement Ambulatoire or Ambulatory Treatment Centre (CTA) of Nouakchott, founded in 2004 by the Ministry of Health in collaboration with the French Red Cross and the World Bank, provides care for patients living with HIV, but the service remains difficult to access in a country with a surface area of 1,030,700 km2.

Talking with family members and friends about HIV/AIDS is not always easy. Many people do not sign up for voluntary testing because they fear being judged or they feel a sense of humiliation. In Mauritanian society, where divorces can be easily be obtained and individuals can have multiple partners, HIV/AIDS has a bad image and is associated with adultery or sexual deviancy; it is considered a disease of shame.

“The other person’s gaze prevents us from going to the test and talking about it. People are therefore afraid to take the test and then follow their treatment if necessary. Fear should not lead to a refusal to take the test — the virus that has invaded an organism is not afraid of it,” said virologist Zahra Fall Malick. 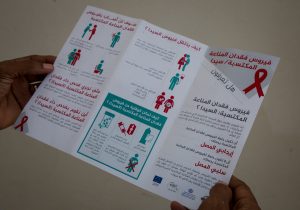 His colleague Dr. Ndioubnane El Moctar, an obstetrician gynaecologist, compared it to tuberculosis or diabetes, a disease with a similarly poor image in Mauritania a few years ago: “Thirty years ago these diseases, throug

h ignorance, were synonymous with shame. The turn for HIV/AIDS [stigma to disappear] will come, it takes time. The perception of a society is difficult to change. [People once] considered AIDS to be a disease linked to sex outside marriage or a curse, in a religious and traditional society it is a taboo, a social convention that must be changed.”

Myths, clichés and rumours hinder access to and dissemination of HIV/AIDS-related information, and facts are often challenged during sensitization efforts. Debates about the origin of the virus and its transmission are often an opportunity to provide information about pervasive prejudices.

The EU-IOM Joint Initiative in Mauritania plans to raise awareness of HIV/AIDS among a group of 1000 people. The project, Strengthening Border Management, Facilitating the Protection and Reintegration of Migrants in Mauritania, aims to reach migrants, community leaders and beneficiaries of the Assisted Voluntary Return and Reintegration programme. Awareness-raising activities will be carried out to provide basic and essential knowledge for reducing the transmission of sexually transmitted infections and HIV/AIDS in the long-term.

In partnership with the Mauritanian NGO Stop Sida, IOM, the UN Migration Agency, is implementing these awareness-raising sessions and organizing talks with target groups. These sessions are interactive and participatory; participants are encouraged to raise questions and discuss prejudices. Exchanges are facilitated by the presence of the Mauritanian medical staff.

Virologist, Zahra Fall Malick explained: “There is a tendency here to believe that Muslim clerics are not very open. Traditionally, premarital sex is of course prohibited, but it is a reality. Religious leaders do not want to advertise condoms but support this approach to protect their communities. Sometimes this can be a shock, but it has to be done, it has to be talked about and people will be listening.”

After attending an HIV/AIDS awareness session, Camille plans to raise awareness his community when he returns to his country.

During one session, an Ivorian participant wanted to know why migrants were considered vulnerable and more affected by the virus because for him “it [amounted to] stigmatization.” Access to health-related information and organisations is particularly important during a migrant’s journey; access to information, and care can sometimes become difficult to obtain, often due to lack of knowledge, cultural differences, language barriers and isolation. Precariousness can also expose people to non-consensual sex, or sexual encounters with a view to monetary transactions.

Participants often mention difficulties in addressing the topic of sexual health subject in a Muslim context, especially in classes with schoolchildren and students, as one teacher pointed out: “We cannot really answer children’s questions in classes using certain precise and explicit vocabulary words such as: penis, female condom… Here people talk about marriage but between what is said and what is done, there is a big difference. Teenagers ask basic questions and want information, the subject is really interesting for them.”

The teacher added, “Demonstrations are impossible, not only because of a lack of equipment but also because the society is very conservative. I had problems with the teaching staff after some courses on sex education. More anatomical models, more didactic terms, and above all speech without filters are needed to get the message across correctly.”

During these workshops, Communication for Development (C4D) is an important theme, as the goal is for some participants to become ambassadors and raise awareness in their communities. This communication principle aims to change behaviours. “Improving or changing one’s lifestyle in the health sector often implies improving one’s quality of life. Changing your customs, your habits sometimes even your traditions is a heavy challenge but it is a necessity,” said Abdel Ghader Ahmed, adviser to the Minister of Health in charge of communication.

Ahmed insists on the quality of the information to be transmitted, its accuracy and accessibility: “Know how to get information, have reliable information. Your own behaviour will influence your relatives and then your community. There is a rebound effect, from the individual, to the family to the community.”

The HIV/AIDS prevalence rate in Mauritania is less than 1 per cent. This percentage remains low compared to many West African countries, but it is essential to continue to inform the population, combat prejudice and make medical facilities accessible to all, especially in the regions, in order to plan for a future generation protected from HIV/AIDS.